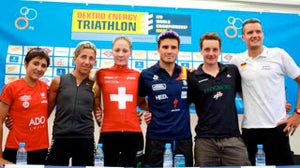 Frodeno is the favorite heading into Sunday’s race, after winning round two of the Series in Seoul four weeks ago. The tall German has plenty of confidence in his ability to sprint to the win and will look to do so again this weekend.

“My sprint is something I’ve really worked on for the past few years,” Frodeno said. “It gives me a lot of confidence heading into the end of the race to know that I can sprint if I need to. It’s nice to be able to rely on those last 500 meters.”

Frodeno will face perhaps his toughest competition of the year, thanks in part to the presence of Brownlee, who is competing in his first event of 2010 after suffering a stress fracture in February. After only four weeks of solid run training, the 22-year-old Brit will look to pick up where he left off in 2009, when he won five Series events.

“Last year was a dream season, so it was a little frustrating to have to hold back at the beginning of this year,” Brownlee said. “I found that coming back from an injury is a good process though. It’s nice to see big improvements week after week. As an elite athlete, that’s not a feeling you often get to enjoy. The last three or four weeks have been great and I’ve been able to train at a high level again.”

Gomez also knows the frustrations of early season injuries, as the Spaniard was forced to sit out his first two scheduled races of 2010 due to a hip injury. He returned to racing last month in Seoul and finished 12th even though he was not able to do much run training beforehand. He’ll now look to improve on that finish this weekend with the hometown crowd behind him.

“It makes a big difference to have the crowd on your side and to have so many friends out there supporting you,” Gomez said. “It provides extra motivation for racing hard. It’s really something special to race at home and I think it helps the sport in this country to have such a big event right here in Madrid.”

Ryf’s chances of scoring a repeat win this weekend look good, given her strong cycling background and the difficult bike course here in Madrid. While she’s confident in her sprinting ability after her win in Seoul, she’ll no doubt look to take advantage of the hills of Casa de Campo Park during Saturday’s women’s race.

Ryf will have to contend with Fernandes on Saturday, who is competing in her first Series event of 2010 after a disappointing 2009 season filled with injuries.

“I’ve learned a lot throughout the last year,” Fernandes said. “It’s hard to say how competitive I will be tomorrow, because I am only in the beginning of my preparations for this year. I will just look to go out and do my own race and have a good time out there.”

Leading the world championship rankings heading into tomorrow’s race is the 4-foot 11-inch Riveros Diaz, who went from a relative unknown to a bonafide superstar after beating the world’s best at this year’s Series opener in Sydney. The Chilean will look to pad her lead in the world rankings tomorrow with current number two Emma Moffatt and current number three Andrea Hewitt sitting out this round of the Series.

“I started racing triathlons when I was nine years old, so I’ve been working to get to this point for a very long time,” Riveros Diaz said. “I know I still have a long way to go, but I feel like I’m moving in the right direction and this race is the next big step for me. Hopefully I can continue what’s been a great year so far.”