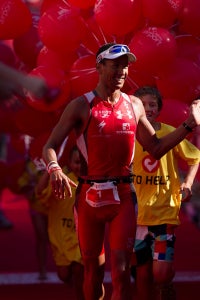 From the moment you step off the plane in Cairns, Australia, you can’t miss Chris McCormack’s tan face and staple red and white kit plastered on banners and posters all around town. As the ambassador for the inaugural Cairns Airport Challenge Cairns, McCormack had some pressure to be the athlete to break the tape at the June 5 iron-distance race.

If you’ve followed Macca lately, you’ll know his “mid-life crisis” has shifted his focus from iron-distance to ITU. Amidst all of his Olympic hopeful speed training, could he still pull off an iron-distance win? Apparently so with an 8:15:56, more than 12 minutes ahead of the rest of the men’s field.

Sunday’s race started at Yorkey’s Knob, just north of Cairns, as the sun was rising. More than 1500 athletes lined up to compete in the full and half distances. McCormack started with only a couple true threats to his win—mostly Australia and New Zealand athletes— after Cameron Brown and Pete Jacobs dropped out due to injury.

The two-loop swim course resembled an M shape, and strong swimmer Clayton Fettell ended in the lead in 43:48, followed by Graham O’Grady and David Dellow. After flipping over a railing to exit the swim in the right spot, McCormack came out in 47:26, trailed by Tim Berkel and Jamie Whyte, both out at 49:28. “I couldn’t believe the pace of the boys in the swim,” McCormack said. “I was in no-man’s land for a while there. The young boys really laid it down in the water.”

The duo of Fettell and O’Grady lead the pack out on the scenic Captain Cook Highway, a coastal, gorgeous stretch of road that took the Challenge team months to secure for race day. Macca caught up around the 50K mark and didn’t give up the lead entering T2. The chase group was more than five minutes down going into T2, including Matty White, Jonathan Hotchkiss, Whyte and Dellow, with Berkel behind by a minute.

“They say ‘you ride for show and you run for the dough’ and I knew that was the key coming into the marathon,” Macca said, creating an 8-minute gap ahead of his competitors by the halfway point. He admitted because he hasn’t put in the mileage, he was “a bit apprehensive about the back end and did struggle a bit there, but I knew my speed would be solid.” Macca furthered his gap to more than 12 minutes by the end with a 2:51 run. He crossed the finish line to see his two daughters waiting for him. “This is my first race back here as a world champ so the win is very important,” McCormack said. “At 38, you take the titles as you can. I’m ecstatic to win this.” 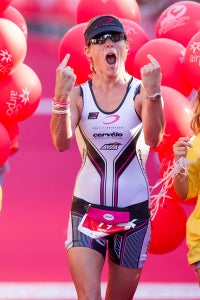 In the women’s race, Australian Rebekah Keat proudly called a home-turf race her own with a 9:26:31 finish. Belinda Granger, Kirsten Molloy and Keat all got out of the water in a second pack, with Carrie Lester a couple minutes behind. Granger, Keat, Molloy and Pearson lead the bike through 75k, and Lester made up some ground to join them.

Keat was out in front when she got a four-minute penalty (“I had a bit of a chat with Belinda and I probably deserved it,” she said), so she knew she had to work hard to catch back up to Granger and Lester, who were ahead of her in T2 by about 2 mins. She worked hard to run her way to the front with a 3:14:04 marathon. “It was really tough and so hot coming in from Yorkeys Knob. I turned to a guy and said, ‘Where’s the trees?’” Keat said. “But the crowd was wonderful and I had the distraction of the perfect scenery, so that helped.”

After capturing her second iron-distance win (she won Challenge Copenhagen last year), Keat ran back into the crowd for some high fives. “Sometimes I rush the finish, but when you win you’ve got to take it in,” she said.

Keat’s twin sister and mom also both raced in a relay. “I thought, if my mom can finish a 2K swim at 60, I’ve got to finish this race.”

Surprise second-place finisher Michelle Mitchell used a 3:16:10 run to blow through the field, Carrie Lester came in third, with Candice Hammond in fourth. Potential race favorite Belinda Granger came in fifth (after flying over her handlebars at some point on the bike), which matched her husband Justin’s finishing spot in the Cairns Half. In true Granger style, she was still out and about chatting and cheering on finishers well into the night.

Cairns competitors all mentioned the beauty of the first-year course: “This course is phenomenal. I’m not sure how they pulled that off,” McCormack said. Keat echoed his sentiments: “On the bike, I don’t usually look around, but I couldn’t help but look to the side and think, ‘I’ve got a good job.’”

The night finished with a spectacular fireworks display over the water, proof of the Challenge Family’s celebratory, welcoming attitude. For 10 reasons you should put Challenge Cairns on your dream list, go here.

How To Move Up in Distance From Olympic to 70.3