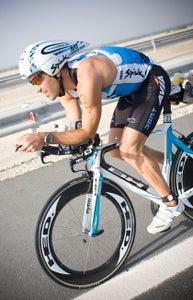 Llanos is from Vitoria-Gasteiz and is no doubt looking forward to racing in front of a friendly crowd. The Spaniard made a name for himself in 2008 when he finished second to Craig Alexander at the Ironman World Championships in Kona, Hawaii. He has since won numerous high-profile triathlons including the Wildflower Long Course Triathlon and the inaugural Abu Dhabi International Triathlon this year. Llanos took top honours at the 2003 ITU Long Distance World Championships, also held in Spain. He is perhaps best known for his off-road talent and has won the Xterra Triathlon World Championship in Maui, Hawaii on three occasions, including last year.

Llanos will have plenty of tough competition coming to defeat him on his home turf this weekend. Other top long-course athletes on the start list are Denmark’s Jimmy Johnsen and Martin Jensen, South African Raynard Tissink and Portugal’s Sergio Marques.

Athletes competing in the event will face a 4-km swim, 120-km bike and 30-km run. The finish line will be located inside the Fernando Buesa Arena, home of the Caja Laboral basketball team. The event begins at 8:00 am local time on Saturday 26 June. Vitoria Gasteiz was recently announced as the host of the 2012 ITU Long Distance World Championships.

Recalled: When History Was Made In Avignon