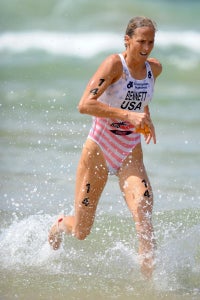 Bennett, who posted the top swim split in three ITU WCS events, earned a $5,000 prize for her swimming performances throughout the season.

Additionally, Sarah Haskins (Colorado Springs, Colo.) finished the series as the No. 2 women’s swimmer, and Chris Foster (Redondo Beach, Calif.) was the second-ranked men’s cyclist. Both Haskins and Foster earned a $3,000 bonus for their respective rankings. Click here for a full list of ITU rankings.

New for 2010, the ITU segment rankings rewarded the best swimmer, cyclist and runner throughout the Dextro Energy Triathlon ITU World Championship Series. Athletes scored points at each of the seven series events, with the crown of best swimmer, biker or runner awarded after the Grand Final in Budapest. In total, $60,000 in segment rankings bonuses were awarded ($10,000 per gender, per discipline).