Last Weekend Now is your Monday rundown of what’s happening in pro triathlon, brought to you with commentary by Brad Culp. (Ed note: So yell at him if you don’t like the comments.)

Just like that, the 2021 professional triathlon season has come to a close. We had three big races this weekend: XTERRA Worlds, Clash Daytona, and Ironman 70.3 Indian Wells. Here’s what went down at each of them. 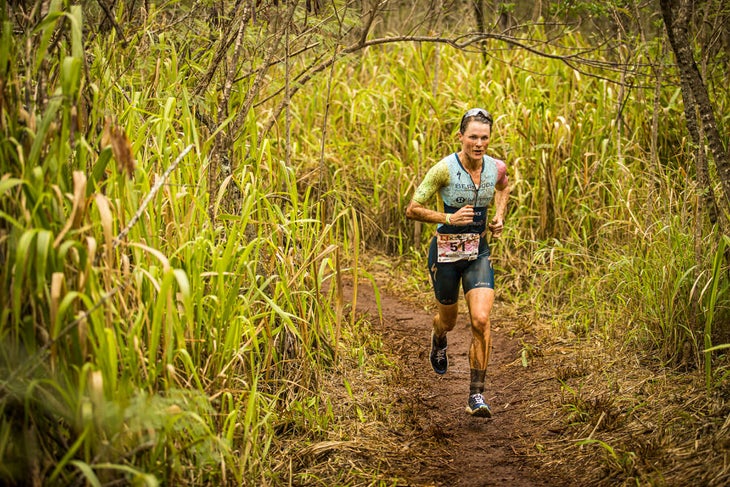 Not that the lack of a swim made much of a difference in who left Maui as a world champ (again). Olympic gold medalist and Triathlete’s Best of 2021 Award winner Flora Duffy won her sixth XTERRA world title to go with her three ITU world titles and two ITU cross triathlon world titles. That’s 11 world titles in addition to her Olympic gold and Commonwealth Games gold. In typical fashion, Duffy was dominant on the bike, riding six minutes faster than her competition en route to a massive, seven-minute margin of victory over Switzerland’s Loanne Duvoisin. Mexico’s Michelle Flipo finished another three minutes back to nab the lowest spot on the podium.

With defending men’s champ Bradley Weiss stuck in South Africa, an Olympic medalist also finished first for the men, with bronze medalist Hayden Wilde taking full advantage of the opening run to win by 24 seconds over Frenchman Arthur Serrieres. Wilde and fellow World Triathlon whippersnapper Seth Rider were the surprise pace-setters on the bike, holding off three-time world champ Ruben Razafa, who went on to finish third. Rider faded on the final run, but still managed to finish fourth in his first XTERRA world champs.

Racing for second place in Daytona 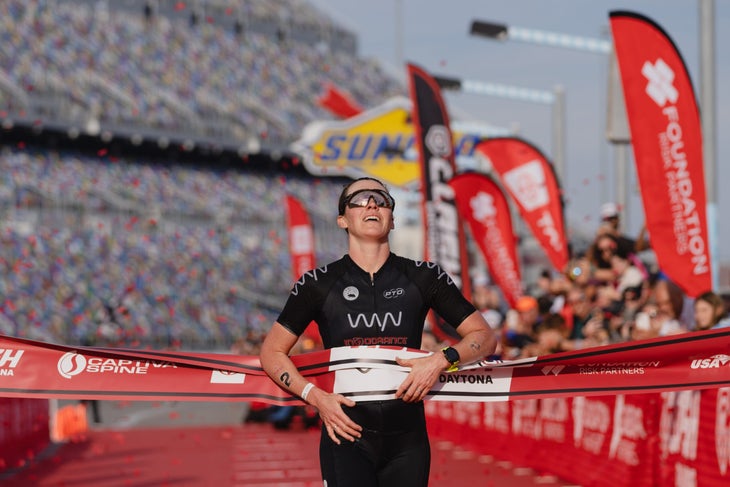 The race formerly known as Challenge Daytona and the PTO Championship was rebranded and scaled back for 2021, but it still brought out a world-class field, including that Norwegian guy everyone is talking about right now. Kristian Blummenfelt finished off his extraordinary season with a relatively easy win, even if it took him almost the entire race to catch Magnus Ditlev, who has cemented himself as the new top über-biker in the sport.

When asked if it were time for a break after the finish, Blummenfelt said it’s time to get back to Norway and get back to work. He has big plans for 2022, which include winning both Ironman World Championships (May in St. George and Kona in October), as well as the Sub-7 project that will take place in the spring. He is a machine unlike any we’ve ever seen in triathlon, and I’ll be shocked if he doesn’t achieve all of his 2022 goals, too.

I don’t know what else to say about Blummenfelt, because every week I’m searching for new superlatives, so I’ll let his competition sing his praises: After the race I texted two of the guys who managed to finish within 15 minutes of him. The responses were, “It’s not fair” and “We were all racing for second.” I’m not used to hearing professional athletes talk like that about their competition.

Ditlev certainly didn’t seem to be racing for second, but that’s where he finished, only 90 seconds after Blu. Rudy Von Berg showed he’s finally back to form after the illness that sidelined him for the Collins Cup, finishing third, with last year’s runner-up Matt Hanson running his way up to fourth.

The women’s race was all about Lucy Hall until it wasn’t. She turned a little lead out of the water into a massive lead off the bike, but nearly five minutes wasn’t enough to hold off Jackie Hering, who won her first race of 2021 and gave herself a big boost in the PTO world rankings.

Hering started the last of four run laps around Daytona International Speedway 90 seconds arrears, but she made the pass at the final turn and went on to win by 23 seconds. Rounding out the podium was a name you might not know but you probably should. France’s Marjolaine Pierré is only 22 years young but she’s already proving to be one of the fastest runners in the sport. She finished a minute behind Hall and a minute ahead of Jodie Stimpson, who won Clash Miami in the spring and seems very well suited to this strange new style of racing.

Check out the photos of race day: Photos: A Speedy Day at Clash Daytona

A Sanders win at Indian Wells 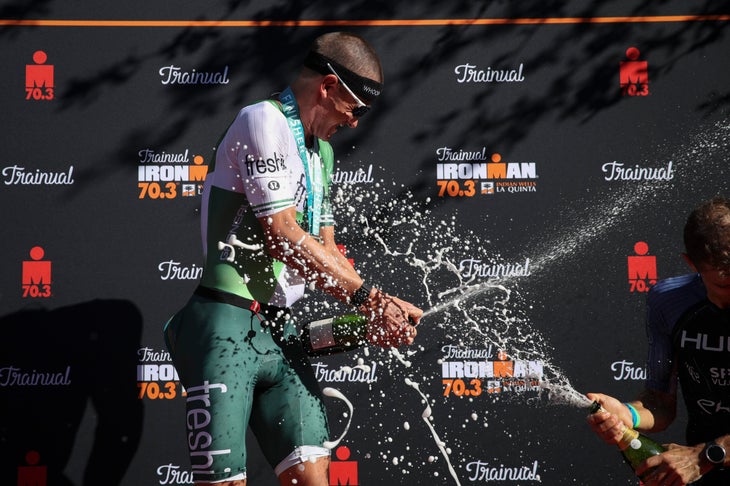 The desert of Southern California brought out the best field of the weekend, at least for the men, as World Triathlon superstars Vincent Luis and Jelle Geens decided to try their hand at 70.3. Luis probably wishes he hadn’t, because he was hit by a car while leading the race on the bike. Somehow he still managed to finish second, ahead of friend and training partner Geens, and now he gets to rip on his friend for eternity because he beat him after being hit by a car.

I don’t know how this keeps happening. After Matt Russell was almost murdered by a minivan in Hawaii in 2017, you would think Ironman would get their safety protocols in order. Cars should not be waved through an intersection if there’s a cyclist in sight. And drivers should be held responsible because they have eyeballs too. This shouldn’t be complicated. Thankfully Vince rode away with only cuts and bruises.

The biggest beneficiary of some idiot’s poor driving was Lionel Sanders, who surprisingly hadn’t won a race since 70.3 St. George in May. Sanders’ 2:00:26 bike split was by far the best of the day, and it propelled him to the finish three minutes ahead of Luis. Geens finished third after a very impressive 1:08:18 marathon, which was four minutes better than his friend, but Geens had the advantage of not being hit by a car—though he did serve a penalty on the bike.

The women’s race also saw some ridiculously fast running by an athlete who didn’t win, as Canadian Tamara Jewett finished with a 1:16:01 half marathon, but it still got her to the line a minute behind Danielle Lewis. After being one of the last athletes to get out of the water, Lewis stormed to a 2:15:52 bike split that bested most of her competition by nearly four minutes. It’s the second 70.3 win of Lewis career and her first of the season. It’s the second runner-up finish in a row for Jewett, after closing with an absurd 1:13 half marathon at 70.3 Augusta in September. The former professional runner has climbed her way into the top 20 in the PTO world rankings and is one big leap in swimming performance away from being a world championship contender at this distance. American Ali Brauer finished four minutes behind Jewett to take third.