As the Netherlands prepares to watch its soccer team play in the finals of the FIFA World Cup, the World Cup Series of Triathlon ascends on the country on the same weekend. 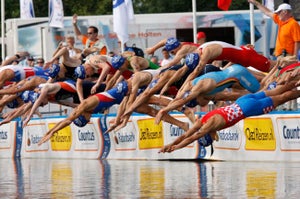 Round five of the ITU Triathlon World Cup Series heads to Holten, Holland this weekend, to kick off the first of four big weekends of ITU racing action. Following this weekend’s World Cup, the planet’s top triathletes will head to Hamburg, Germany for the fourth round of the Dextro Energy Triathlon ITU World Championship Series on 17-18 July, and then to London the following weekend for the fifth round of the Series. The month of exciting racing action finishes up in Immenstadt, Germany on 31 July and 1 August for the ITU Long Distance Triathlon World Championships.

Everything kicks off this weekend in Holland with the Holten World Cup, on a course that hosted the ETU European Championship last season. A total of 68 athletes are on the start list in the women’s race, which will go off at 11:30am local time on Saturday 10 July. There is sure to be plenty of local support for Lisa Mensink, who is the top Dutchwoman competing. Mensink finished tenth at the European Championships in Holten last year, and has been steady through the start of 2010, finishing 14th at the Hy-Vee Elite Cup. Looking to keep Mensink off the podium in her home country will be Ecuador’s Elizabeth Bravo, who is competing in her ninth event of the season, and Aussie Erin Densham, who has won Continental Cups in Asia, Africa and Europe already this year. Other top names in the women’s contest include South African Marie Rabie, Denmark’s Helle Frederiksen and Ukraine’s Yuliya Sapunova.

Headlining the men’s race, scheduled for 1:45pm local time on Saturday, is Aussie youngster James Seear, the reigning U23 World Championship runner-up. Seear is having his best season to date in 2010, finishing third at the World Cup opener in Mooloolaba, Australia and 12th at the Dextro Energy Triathlon ITU World Championship Sydney. A strong Russian contingent of Yulian Malyshev, Ivan Vasiliev and Ivan Tutukin are sure to be in the mix as well. Malyshev is coming off of the best season of his career in 2009, in which he won two Premium European Cup titles. Others possible podium contenders include Ruedi Wild of Switzerland, Joshua Amberger and Jamie Huggett of Australia and Reinaldo Colucci of Brazil.

One week after the Holten World Cup the world’s best triathletes will take to the streets of Hamburg for the fourth round of the Dextro Energy Triathlon ITU World Championship Series. The event will take place alongside the Hamburg City Man Triathlon, which is the world’s largest age-group triathlon with over 12,000 athletes slated to participate.