While American women fared well in the ITU Best Swimmer Rankings, the ITU Best Runner Rankings belong to a group made up of all International athletes. Beijing Olympic Gold Medalist Jan Frodeno of Germany leads the men with 37 points, while Barbara Riveros Diaz of Chile leads the women with 33.5 points. 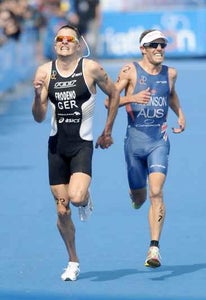 As evidence of the importance of the run segment in ITU races, Riveroz Diaz sits at the top of the ITU World Championship Series Rankings for the women. Fradeno is currently in fourth.

See the complete explanation of the rankings below:

New for 2010, ITU has introduced segment rankings, which will reward the best swimmer, biker and runner throughout the Dextro Energy Triathlon ITU World Championship Series. Athletes will be able to score points at each of the seven Series events, with the crown of best swimmer, biker or runner being awarded after the Grand Final in Budapest. In total, $60,000 in segment rankings bonuses will be awarded at the end of the season ($10,000 per gender, per each discipline).

This week we take a look at the run segment rankings after three of seven Series races. Athletes score points based on their run split, with a total of 20 points going to the fastest runner at each event. At the end of the season (after the Budapest Grand Final), the award for best runner of the season and the $10,000 bonus will go to the male and female with the best five scores out of the possible seven events. A total of 100 points would mark a perfect score.

Leading the way for the title of best male runner of 2010 is Germany’s Jan Frodeno, the 2008 Beijing Olympic Champion. After a bike accident took him out of contention for the win at the opening round of the Series in Sydney, the German unleashed an amazing 29:08 run split in Seoul to win. That run tied Courtney Atkinson for the best split of the day and was 20 seconds faster than any other competitor. Frodeno also posted the second-best run of the afternoon in Madrid, which pulled him from the second pack at T2 up to sixth-place overall at the finish.

Currently second among the men in the run rakings is Russian Alexander Brukhankov, who is also ranked first in the ITU World Championship Standings. The young Russian blitzed through the tough 10K course in Sydney in 30:55, which was the fastest run of the day and 25 seconds better than race winner Bevan Docherty. Brukhankov’s teammate, Dmitry Polyansky, is currently third in the run rakings with consistent run performances at all three Series events. Polyansky also holds a commanding lead in the current Best Swimmer Rankings.

Leading the way for the women is 22-year-old Chilean Barbara Riveros Diaz, who is also ranked first in the World Championship Standings. Riveros Diaz put up the second-best run split in Sydney en route two winning a three-way sprint against New Zealand’s Andrea Hewitt and Aussie Emma Moffatt, who currently sit second and third in the Best Runner Rankings, respectively. Japan’s Mariko Adachi sits fourth and is the only athlete to score run rankings points at all three Series events so far.

The next opportunity for athletes to score points toward the ITU Segment and World Rankings will be at the Dextro Energy Triathlon ITU World Championship Hamburg, which takes place 17-18 July.

Best Runner Rankings After Race 3 of 7

How Does A Triathlete ‘Go Pro?’