Get a preview of the July/August issue of Inside Triathlon, available on newsstands now! 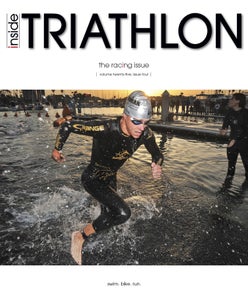 It features an inside look at the mental tricks that Ironman World Champion Craig Alexander and multiple Ironman champion Belinda Granger play when races get particularly miserable. The issue also focuses on a profile of one of the most successful collegiate triathlon teams, Inside Triathlon’s first-ever science-fiction feature, and analysis of a radical new theory that says that bonking—even Paula Newby-Fraser’s epic Kona bonk—is all mental. Don’t forget to pick up Inside Triathlon for this and more, including a photo essay on the first annual Abu Dhabi International Triathlon.

Photos from 20 Years of Challenge Roth