When Major James “Weasel” Weis completed the Ironman 70.3 California, he didn’t know it would be his last race. An attack helicopter pilot in the Marines, he was killed in action on July 22 in Afghanistan. He was a friend to many, a caring father and a loving husband, but he was also a competitive triathlete who took a lot of care in building this race-ready bike. 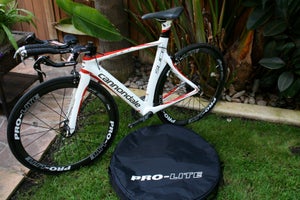 Weis’ friend and fellow Marine and triathlete, Maj. David Steele, was asked by Weis’ wife to sell his triathlon gear, and Steele would like to sell it before he leaves for Afghanistan in a week to replace Weis’ squadron. The money from the sale of the bike will go to the surviving family.

If you’re in the San Diego area and interested in the Slice, you can contact Steele through his Craigslist ad.