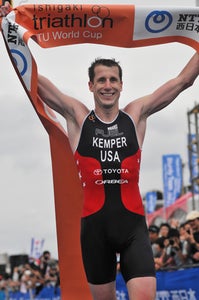 Kemper (Colorado Springs, Colo.), a USA Triathlon National Team member and three-time Olympian, broke away on the run to earn gold at the Ishigaki ITU Triathlon World Cup in Japan on April 17. The victory marked Kemper’s first win on the ITU World Cup circuit since 2005 and fourth World Cup title of his decorated career. Just 15 seconds off the pace out of the water, Kemper entered T2 among a pack of 40 athletes, 50 seconds behind a lead group of three off the bike. That advantage was quickly erased, as Kemper caught the leaders on the first lap of the run, grabbed a solo lead on the second lap and held it until the finish. Kemper’s 31:12 10k run split was the second fastest of the day.

Ice hockey player Hilary Knight was the USOC’s female April Athlete of the Month, while figure skating duo Meryl Davis and Charlie White was awarded Team of the Month honors. Knight, Davis and White all claimed gold for Team USA at world championship events in April.

Each National Governing Body (NGB) may nominate up to but no more than one female, one male and one team per discipline. The winners are then chosen by a voting panel from that pool of nominees. Online fan voting, via a Twitter poll, accounts for 10 percent of the total vote.

U.S. Olympic Committee April Athletes and Team of the Month:

Founded in 1982, USA Triathlon is proud to serve as the National Governing Body for triathlon – one of the fastest growing sports in the world – as well as duathlon, aquathlon, aquabike, winter triathlon and paratriathlon in the United States. USA Triathlon sanctions 3,500 races and connects with more than 135,000 members each year, making it the largest multisport organization in the world. In addition to its work with athletes, coaches, and race directors on the grassroots level, USA Triathlon provides leadership and support to elite athletes competing at international events, including ITU World Championships, Pan American Games and the Summer Olympic Games. USA Triathlon is a proud member of the International Triathlon Union and the United States Olympic Committee.