The Alpe d’Huez Triathlon took place today—on a Wednesday. It didn’t start at the crack of dawn, but rather 9:30 a.m. The official distances were 2.2K swim, 115K bike and 22K run, not your standard long-course race. But that’s how they do it in France. 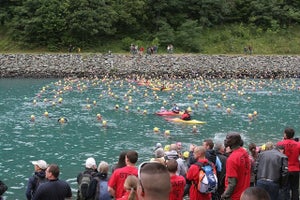 Click here to view a photo gallery from the race.

The swim course took place in the crystal clear waters of the Lac du Verne surrounded by lush greenery. The bike race included two mountain passes: the Alpe du Grande Serre and the Col d’Ornon, as well as a challenging climb of 21 switching bends up to Alpe d’Huez—of Tour de France fame. The three-looped run course took place around the resort of Alpe d’Huez and gave athletes a break from the concrete with a mix of asphalt and mountain roads.

At the start of the race, the British dominated with Daniel Halksworth and Jodie Swallow, last year’s champion, racing to the front of the pack first. However, this is a biker’s race. So the difficult bike course, combined with freezing temperatures and unwelcome rain, saw the strong cyclists rise to the top. Australia’s Aaron Farlow took the lead and in the chase back was South Africa’s James Cunnama. For the women, Morrison, a strong long-course athlete, took the hills and didn’t look back, leaving Swallow out of the running for a repeat title.

During the run, Del Corral took the lead, finishing six minutes ahead of his nearest competitor, Reto Hug of Switzerland. On the women’s side, Swallow had to DNF. She had been suffering from a foot injury and just couldn’t hang on for the just over half marathon-distance run. However, Morrison was able keep the lead, crossing the finish line a whopping 21:30 ahead of Mary Beth Ellis of the U.S.

Everything You Need to Know About the Ironman 70.3 Oceanside Course