See the press release from Newton Running below: 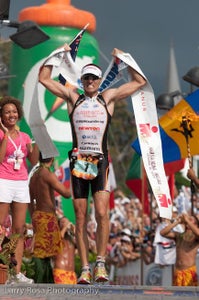 Newton Running is pleased to announce that professional triathlete Craig Alexander has agreed to represent the leader in natural running footwear for the remainder of his pro career. Alexander will be competing for his third straight World Championship Ironman title next week in Kona, Hawaii.

“Craig has been an amazing ambassador for our brand and he’s an important part of our product development team,” says Danny Abshire, Newton Running co-founder and chief technical officer. “He has near-perfect running form and he provides us with terrific feedback to help us continually refine our designs and develop new technologies.”

Alexander, who spends half the year in his native Australia and the other half in Boulder, has been a professional triathlete for more than ten years. He has compiled a remarkable list of wins around the world in a variety of distances. So far in 2010, he has placed first in seven races and is busy preparing to defend his title in Kona on October 9th.

“Newton Running shoes have been a major part of my success for the past several years and at this point I can’t imagine running in anything else,” says Alexander. “I’m also proud to be part of an independent company that demonstrates a genuine commitment to giving back to the community through their work with organizations such as Athletes for a Cure, Trickle Up and One World Running.”