Australia’s Chris McCormack will be the first Ironman World Champion to be features on the Wheaties box. McCormack also graces the January cover of Triathlete magazine, available on newsstands now. 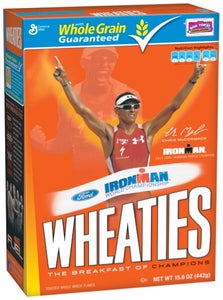 “Chris McCormack is an inspiring athlete, and we are proud to recognize the multi-sport endurance triathlon events and competitors that Chris represents by featuring him as our first Ironman champion to grace Wheaties and Wheaties FUEL boxes,” said Wheaties FUEL Marketing Manager Dan Stangler. “Wheaties FUEL, designed to fuel athletic performance, is a great nutrition source for athletes looking to jumpstart their morning as they pursue excellence on and off of the race course and Chris is certainly a perfect example of that journey.”

McCormack battled against extreme heat conditions, heavy rain fall and melting lava roads to swim 2.4 miles, cycle 112 miles and run 26.2 miles in Kona this year. He has triumphed under equally-challenging conditions at nearly every major short course on the global triathlon calendar from Chicago to San Diego and New York City to Los Angeles. In addition, he has captured first place at Ironman distance races from Australia to Germany, as well as the Olympic Distance World Championship, and his Ford Ironman World Championship win marks his fifth top-10 finish. McCormack finished the grueling 140.6-mile Ford Ironman World Championship race in just over eight hours, at 08:10:37 to break through the finish line tape first out of approximately 1800 of the world’s top professional and age group athletes competing in the 2010 championship event.

“Breakfast is such an important meal of the day for any athlete. Given the long hours I train, I really need a nutrition source with a blend of simple and complex carbohydrates that can help fuel me,” said Chris McCormack. “I never miss breakfast, and I include whole grains and B vitamins to provide the long-lasting energy I need to endure a grueling workout, so I can’t think of a bigger honor than being on a Wheaties box and representing the accolades of being an Ironman. I know my kids will get so excited to see my face in the cereal aisle.”

McCormack’s appearance on the Wheaties box will be accompanied by the cover of the Wheaties FUEL box, which was the official cereal and sponsor of the Ford Ironman World Championship because it provides balanced nutrition that helps athletes prepare to win. Wheaties Fuel provides a blend of carbohydrates: simple carbs for rapid supply of energy, complex carbohydrates from whole grain to provide long-lasting energy and help fuel working muscles, and fiber to help curb hunger while limiting feelings of fullness. B-vitamins help unlock the energy contained in the carbohydrates. Wheaties FUEL also contains an excellent source of iron. Iron helps transport oxygen to working muscles. The cereal was developed by a team of elite athletes in the various sports of triathlon (Hunter Kemper), decathlon (Bryan Clay), basketball (Kevin Garnett), baseball (Albert Pujols) and football (Peyton Manning), and a leading sports nutritionist (Dr. John Ivy, University of Texas) to help fuel wins. Proper nutrition is critical to reaching the highest levels of athletic performance. Each of us strive for our own wins every day. Wheaties FUEL can help you prepare for any challenge.

“It is a great day for the sport, and for triathletes everywhere, to have Chris McCormack featured on Wheaties and Wheaties FUEL boxes as the first ever Ironman to receive this great honor,” said Ben Fertic, chief executive officer, Ironman. “He joins an elite list of athletes, and it’s exciting to see the sport – and its accomplished athletes – receive this recognition by such a highly regarded brand as Wheaties.”

Not only is McCormack the first Ironman World Champion to be featured on a Wheaties box, he will also be the first athlete featured on the cover of the Wheaties FUEL box outside of the cereal’s elite co-creators.