Sam Gardner and Renata Bucher defended their XTERRA Saipan Championship titles on a hot and steamy day in the Commonwealth of the Northern Mariana Islands last Saturday. 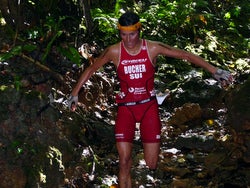 It’s the sixth straight Saipan victory for Bucher, and her 20th career XTERRA championship since winning her first one here back in 2005. Bucher had the fastest bike and run splits and crossed the line in 2:58:19, nearly nine minutes ahead of runner-up Shonny Vanlandingham.

In the men’s race Gardner caught and passed Mike Vine (who won the inaugural race here in Saipan in 2002) about halfway through the bike then held off the hard-charging Canadian on the run. His time of 2:34:03 was just 43 seconds better than Vine.

Jason Chalker (the 2003 Saipan Champ) came in third despite a hard crash on the bike that left a sizeable gash in his arm requiring five stitches.  Chalker’s crashes in Saipan through the years have been stuff of legend, highlighted by the time a boonie dog jumped in front of his front tire at top speed during the Tagaman road tri years back.  “It never has stopped him from having a great time though,” smiled “Kahuna Dave” Nicholas.

Takahiro Ogasawara was fourth and finished in the top five here for the third straight year while Michael Hiscott placed fifth in just his first-ever XTERRA.   Juergen Feherenback of Titisee, Germany, who was honored as the “XTERRA Warrior” award winner in 2009, said ‘You have not done an XTERRA until you have done this one.”
The race consisted of a 1.5-kilometer ocean swim, a 30k mountain bike that climbed 1,500 feet to the highest point on the island, and an epic 12k trail run that took participants through heavy jungle and into caves used during World War II and along beautiful white sand beaches (like the one Kevin Carey is running on just before the finish line here).

The race served as an important XTERRA World Championship qualifier, as the top age group athletes in each division earned their place at the start line in Maui by virtue of their performance today.  The top overall amateur male was David Spelger of Guam with a time of 3:20:07 and the top amateur female was Caroline Colonna of New Mexico in 3:35:03.

There was also an XTERRA Sport race comprised of a 750-meter swim, 20km-mountain bike, and 5km trail run. For the second straight year the overall male winner was Kieran Daly, the General Manager at the host hotel – the Pacific Islands Club, while Emma Viotto won the women’s race. 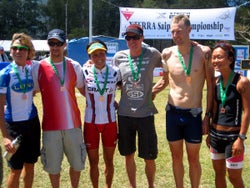 From left to right, Shonny Vanlandingham, Mike Vine, Renata Bucher, Sam Gardner, Jason Chalker, Mieko Carey and dozens of others will stay in Saipan for another week to race in the Tagaman and chase the epic PIC Double award, which goes to the man and woman with the fastest combined XTERRA and Tagaman time.  Tagaman is a road triathlon held next Saturday, March 20.  Winners receive $500 cash, seven nights’ accommodation and a complimentary Gold Card (three meals a day in a choice of three restaurants) at the Pacific Islands Club.  In between the two races are a whole slate of self-improvement clinics and fun activities for the family.  After Tagaman, most will take an inter-island flight and race in XTERRA Guam on March 27.