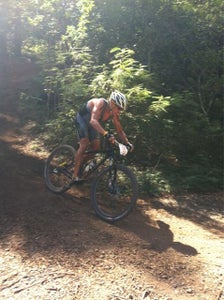 Armstrong rode through Rana, Stannard, Frodeno and Allen to take the lead on the bike, but former Olympic mountain biker Michael Weiss tracked him down and took the lead at mile 15.

Armstrong stuck to his wheel as long as he could.

Dan Hugo picked his way through the field and closed the gap to Armstrong and Weiss to 43 seconds by mile 15.

Despite Armstrong’s best efforts, Weiss gapped him and opened a 20 second lead.

Just miles before T2, Hugo was 1 minute behind Armstrong, Conrad Stoltz 2 minutes back with Eneko Llanos and Josiah Middaugh shortly behind the 4-time world champ. Nico Lebrun rides 5 minutes behind Weiss. All of Armstrong’s pursuers have proven themselves to be excellent XTERRA runners.

Weiss left T2 with roughly a minute on Armstrong.