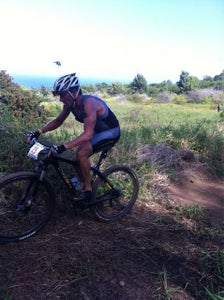 the leader Ivan Rana by 47 seconds a few miles into the ride.

He made quick work of that gap. Twelve minutes later he was within 7 seconds of ITU stars Jan Frodeno, the defending Olympic champion, and Ivan Rana. Armstrong sat in third position for only a few minutes. He bridged the gap to the leaders and quickly dropped the draft-legal athletes before opening a 44 second gap in a matter of minutes.

With Stoltz 1:45 behind Armstrong, Weiss, a former Olympic mountain biker, accelerated through the field and closed the gap to Armstrong.