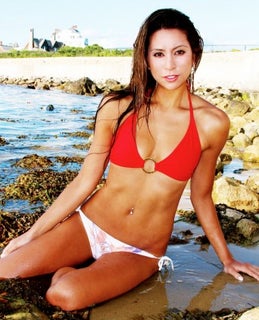 The winner of the Miss Triathlete.com swimsuit contest for the month of December is Chrissie H. of New York, N.Y. You chose Chrissie with your votes! The win means that she is a finalist for the Title of Miss Triathlete.com 2011. Chrissie will also get $100 to spend on the TYR gear of her choice. The overall winner will be chosen by Triathlete editors and will be announced in the next two weeks. View all of the December entrants.

We chatted with Chrissie to learn more about the personality behind the beauty:

Triathlete.com: How long have you been competing in triathlons?

Chrissie: This summer will mark my third year competing. I grew up doing gymnastics from when I was two until nine. My parents threw me in swimming, deeming it the “safer” of the two. I swam competitively all throughout high school, complete with 4:15 a.m. wake times for before school practices and three and a half hour after school practices. Needless to say, seeing my hair in anything but a wet mop on the top of my head was a rarity.

This took me to NYU where I acted as captain of the varsity swim team my senior year. Once I graduated, I took a much needed break from the water. I started running to stay in shape and one spring my brother and I heard about a half Ironman coming to Providence that summer. With the swimming and running background in place, a few months later, we crossed the finish line and have made it a yearly tradition ever since. Part of this tradition involves my brother confidently declaring he’s going to beat me, and then subsequently getting destroyed. He makes a valiant effort though, I will give him that.

Triathlete.com: What is your proudest accomplishment in the sport?

Chrissie: My proudest accomplishment by far has been the progress made from my first year of competition to my second. With more training, both volume and intensity, I trained my way to a 1:13 PR from my first half Ironman to my second, along with numerous PRs along the way in shorter distances. Really, it’s exciting to push my body to physical and mental limits and I know this summer will mark my best yet.

Triathlete.com: What does it mean to you to move on as a finalist in the contest?

Chrissie: I’m beyond honored to have been chosen among such a group of strong, accomplished men and women who represent the sport of triathlon. Getting here required the help of friends and family, and I honestly feel really humbled and lucky to have such amazing friends reach out from all over to show support.

Triathlete.com: Do you have a background in modeling?

Chrissie: Not unless you count the time my mother made me a midriff bearing Princess Jasmine costume when I was 10 and promptly showed me off to all of her friends.

Triathlete.com: What do you think you’ll spend your $100 from TYR on?

Chrissie: A girl can never have too much spandex, and I have my eye on the TYR Carbon Aeroback Short John.

Triathlete.com: What do you like to do for fun outside of the sport?

Chrissie: When not in compression shorts or my beloved run visor, as an English major, I found teaching a great way to couple my love for reading and working with kids. It’s also nice because you can bring in and teach the never-give-up mentality of triathlon. Granted they’re not doing a brick after a 5000 yard swim, but mastering a skill takes practice and dedication, whether in a sport or life in general.

#MyTri: A Near-Death Experience Changed the Way I Live—And Tri