More than 700 endurance athletes from 44 countries and 39 U.S. states competed in the event, which started with a one-mile rough water swim at D.T. Fleming Beach, continued with a muddy 18.5-mile mountain bike ride that traversed the West Maui Mountains, and finished with a 6.5-mile trail run through forest trails and beach sand.

There was more than 4,000 feet of combined climbing on the technical bike and run courses, which were muddy and slippery due to recent rainstorms on Maui’s northwest coast.

Men’s Race
In the men’s elite race New Zealand’s Sam Osborne and Spain’s Roger Serrano were first out of the water, with last year’s winner Brad Weiss, three-time winner Ruben Ruzafa, and Akerson about one-minute behind.

Ruzafa posted the fastest bike split for the sixth straight year to take the lead early on the bike, but Akerson was just 40 seconds behind him by the time they got to the bike-to-run transition.

At mile two of the run, Akerson passed Ruzafa and never looked back, taking the tape in 2:52:41, just 35-seconds ahead of Weiss, who posted the fastest run to finish second.

“I can’t even believe it,” said Akerson after the race, full of emotion with tears of joy in his eyes. “I opened it up today and just felt great. My Pura Vida spirit came out. During the run when I got the lead and I knew it was going to happen I wanted to cry but I had to tell myself to keep going, that I couldn’t cry if I hadn’t won it yet.”

Osborne, who finished third, said a podium at the world championship is nothing to frown upon and he’s happy to have finished the race “completely knackered with nothing left in the tank.”

Of interest, Osborne is scheduled to take Prince Harry and Meghan Markle on a mountain bike ride around his hometown trails in Rotorua next week.

“It won’t be like this,” said Osborne. “We’re going to have a nice ride through the redwoods.” 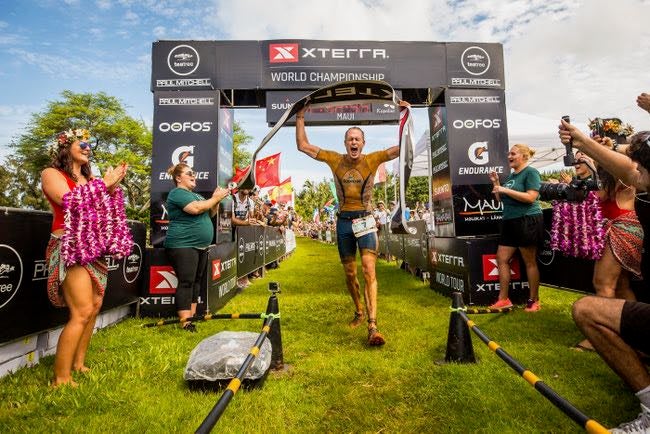 Women’s Race
The women’s race belonged to Paterson, who had the fastest bike and run times, coupled with one of the better swims of her career. She attributed her success to consistency of training, which has been lacking during the past five years while she struggled with Lyme Disease and injuries.

“I’ve done a lot of hard work over the summer and a lot of strength training and time at the gym,” said Paterson after the wreath of ti leaves was placed on her head. “Instead of being frustrated with the conditions, I was so grateful and happy to be out there. I may have dropped a few f-bombs here and there, but I kept it pretty chill.”

By the time she cruised across the finish line at 3:29:07, she had a more than a 10-minute lead over Mexico’s Michelle Flipo, who finished second, making this her best performance at the XTERRA World Championship.

“It was a chore just to finish,” admitted Flipo, who has been racing on the ITU circuit this year in an effort to qualify for the Mexican Olympic Team. “It was such a challenge and I’m glad it’s over. The last time I raced here, it was also muddy, and I let it get me down. This year, I tried to keep calm and not get too frustrated.”

New Zealand’s Lizzie Orchard finished third, and admitted that she didn’t go all out on the bike to save something for the run. She hiked her bike a good deal because in some instances, it was faster than trying to ride through the mud.

“This course is really interesting because I feel like sometimes, when you get to the high point, you think that it’s all downhill,” explained Orchard. “But really, you still have more than half the course to go. This year I conserved energy a bit because there are some really steep hills in the last 10K.”

Read the complete recap at Xterraplanet.com. 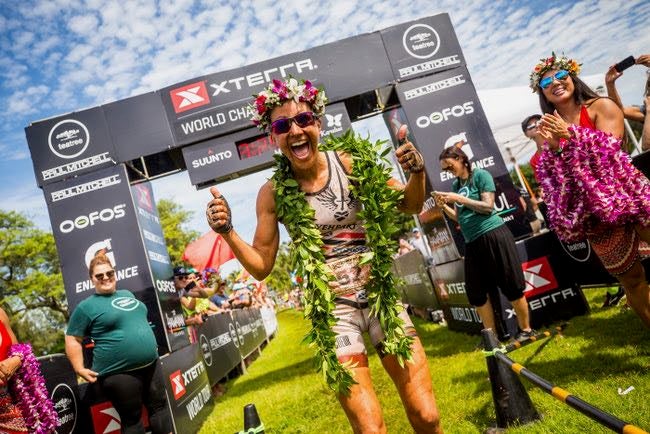 Jan Frodeno Out of Kona