These female entrepreneurs saw a need in the endurance world and filled it. They own and operate businesses, all while managing to continue to train and race. These are their stories, sprinkled with a little advice.

Out on a run on a cold, winter day, Nicole DeBoom passed by a store window and saw her reflection. “I looked like a boy,” she said. So she went home and wrote the word “pretty” on a slip of paper. That paper still hangs on the walls of the company headquarters of Skirt Sports to this day.

DeBoom was on the triathlete circuit since 1994 and raced professionally from 1999-2005. “I always followed the motto ‘Look good, feel good, perform better.’ I felt like this would raise my level of confidence and I’d do better in races,” said DeBoom. But she always felt frustrated with the lack of feminine work out attire on the market.

So DeBoom, wanting to do what Juicy did for sweats, came up with the “work out skirt” and went to school. “I took classes at the local chamber of commerce and learned from the ground up,” she said. She followed two pieces of advice: 1. Focus the product—rather than 10 pieces of clothing, she focused on just the running skirt.  2. Make some prototypes and test it.

As a triathlete, DeBoom tested the running skirt during the marathon at Ironman Wisconson in 2004, which she ended up winning. “It was kind of a perfect storm: testing the product and winning my first Ironman with it,” she said.  In 2005, Skirt Sports made its debut at a marathon expo and in 2007, DeBoom launched the Skirt Chaser 5K series with events in Tempe, Ariz. and Denver, Colo.

Currently, Skirt Sports has 13 employees and has experienced a 30-40 percent growth over the past few years. “In this economy, that’s good. We’ve staying strong,” said DeBoom. “People told me it would cost more and take longer than you think, which is true. But I’ve had persistence and worked hard. If you have a 100 percent unwavering belief in your product, it will be successful.”

Fun fact: Skirt Sports offers a program called “Kick It Forward.” “I get asked to sponsor a lot of events and I thought is this $500 going to help my business?” said DeBoom. So rather than just always sponsor races, she uses the money the help others. The program financially assists women who have barriers to fitness. It pays for their entry frees and offers them one-on-one mentoring. “It’s brand aligned, but it’s something different and makes us feel good,” said DeBoom.

Good decisions typically aren’t made when alcohol is involved. But with Kebby Holden and Stephanie Swanson, a little wine led to the creation of a dream job.

Over a bottle of vino one evening, Holden and Swanson were discussing the “ugliness” of the standard black shorts/pink top among female triathletes and decided to change it. Already next-door neighbors and training partners, that night their relationship instantly elevated to a new level: business partners.

Through hours of brainstorming, attending clothing school and learning the process of garment making, they created apparel that follows the adage “fashion, fit and function.” The women wanted their racing kits to produce little chafing, have sophisticated designs and offer little touches of creativity. “We really wanted to design something for the longer distances. We’re out there [training and racing] for such a long time, so we wanted to create things that were functional,” said Holden.

So far, it is working. SOAS Racing, named after the muscle that contributes to flexion and external rotation in the hip joint, is growing and expanding. But Holden and Swanson experienced their success from listening to the clientele. They solicit feedback constantly through testing and from their social media sites. “Women are social and really want to share. Plus, women are picky, too. Men don’t really talk about clothes, so having a female customer base has been helpful,” said Swanson. “We are also our target customer. We are triathletes and know what we need.”

They currently have five employees, but plan to expand. “We want to grow slowly and be smart about it,” said Holden. Future plans include new office space, hiring of sales representatives and the release of a new apparel line.

Trial-and-error pains: “We got a sample swimsuit and it looked like a bag. It’s definitely been a learning process,” said Swanson. 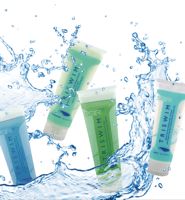 Like any triathlete, Karen Smidt-Allard spent hours in the pool. And as any swimmer can attest, the chlorine stripped her hair of color. Yet she couldn’t find any budget-friendly solution. Only top-end beauty stores sold products strong enough to remove chlorine. Knowing others had the same problem, she took action.

Growing up in a family of entrepreneurs, Smidt-Allard already had the business gene. So she contracted a chemist and together they formulated TRISWIM.

“I had never done anything like this. I was never in manufacturing, so I just took on this ‘project.’ I was lucky to be surrounded by guys in the industry and they told me, ‘Don’t just come out with one thing, come out with three things.’” So when Smidt-Allard entered the market, she had shampoo, body wash and lotion ready to be sold.

And she did it intelligently. Rather than go to mom-and-pop shops, Smidt-Allard took on the major triathlon stores, such as TriSports.com, figuring if they’d take the product, the smaller stores would follow.

With only $5,000 to spend, Smidt-Allard made samples that were first distributed at the Ironman 70.3 Oceanside in 2004. She started to get requests and products started to fill the stores. “Once the swimming world got a hold of TRISWIM, it became a good seller,” said Smidt-Allard.

Now the company is the official hair and skincare line of the United States Masters Swimming and keeps growing due to the burgeoning open-water swimming market.

What’s left is for Smidt-Allard to take the product mainstream. “It’s still hard though because the people who take their kids to swimming lessons don’t shop at triathlon stores!”

Fun fact: Most of the company’s employees are moms. To keep in shape, they raced the UCLA Iron Bruin Corporate Challenge together. 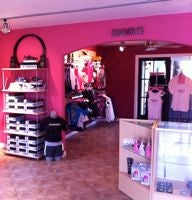 Gobs of pink—from bubblegum pink walls to cotton candy-colored ceilings, it is no doubt one has entered the store appropriately titled “Pink Peloton.” Owner Rachelle Smith opened the store just this summer to cater to the female-endurance crowd.

“I came up with the idea when I was training for Ironman Couer d’Alene. I went into my local bike shop in need of a pair of medium-sized good cycle shorts. The sales guy tried to put me in a men’s small because they were out of women’s,” said Smith.

Realizing she couldn’t be the only one with this frustration, the idea for Pink Peloton was born. With a background in retail, having worked for such famous athletic brands as Reebok and Lululemon, running a store wasn’t a new venture for Smith. And with the lack of women’s tri-specific apparel in the San Diego market, she saw the need and created the solution.

Smith’s Pink Peloton looks and feels like a multi-sport boutique, which should appeal to the fashionista crowd. She carries cycling and triathlon gear, as well as yoga apparel and accessories. Additionally, Smith will conduct workshops for women to come and learn more about their respective sports.

“I wanted to create a community at Pink Peloton where women can come and be with like-minded women. I know that will take time to create, but I believe that it’s what will make my store even more unique,” said Smith.

Like many women, Susan Otcenas’s weight moved up and down. But as a triathlete, she found that the sports world hadn’t noticed the female body. “Everything was very male dominated, not made for women. But I’m not built like a man,” said Otcenas.

So at the dawn of the Internet, Otcenas and a business partner set off to form a women’s-focused cycling apparel company and soon thereafter expanded into the triathlon world. But she separated herself from the competition by catering to niche markets: Athena and children.

Otcenas began offering a large selection of plus-size clothing. “I wanted women to be comfortable in their own skin. This happens if they are in clothes that are more comfortable,” explained Otcenas. She now carries apparel up to a size 26 and down to an extra small for kids. “I really believe we need to bring kids into this sport or it’s just going to become an aging sport,” said Otcenas.

She has worked with vendors such as Nineteen Wetsuits to create “extended” sizes and encourages the companies to attend the sprint triathlons. “Most of these vendors go to events like Kona, but where the sport is really growing is at the sprint distance. I’m working to convince them to add plus-sized products to their lines,” said Otcenas.

Because of her success and knowledge, Otcenas also mentors small business owners on how to turn profits back into their companies and gives them a basic understanding of cash flow.

Fun Fact: Team Estrogen’s staff all compete in a local triathlon together. The company pays for their entry fees and they can take apparel out of stock. They also have a tailgate party to celebrate.