Ironman announced today that the 2017 Ironman 70.3 World Championship, set to take place on Sept. 9-10 in Chattanooga, Tenn., will kick off with a rolling start within each age group.

Both changes were largely created to provide a more fair world championship experience for athletes by spreading athletes out and minimizing bike course density. Ironman says that they’ve done significant analytics research of past participant data to determine the order in which the age-groups would start. (See the complete list of start times below.) Athletes within each age group will self-seed based on their anticipated swim time, with the fastest swimmers entering the water first.

Ironman has tested rolling starts at 70.3 events this year. The format has been largely well-received, with the main complaint being that athletes don’t have the opportunity to race other athletes in their age groups. The presented format solves that problem with the rolling starts taking place within age groups, instead of among the entire field.

“The execution of the swim start is critical in the management of bike course drafting. The adjusted swim starts will help to ensure as fair of a race as possible for age-group athletes,” said Andrew Messick, Chief Executive Officer of Ironman in the press release. “We know how important world championship events are for our athletes and this decision is a direct response to the feedback we have received. By spacing out the start times in the sequence that has been determined, the athlete field will be more evenly spread throughout the course and subsequently reduce the opportunity for drafting.”

While the new format will have the men and women’s fields competing on separate days, the new start times will not change the existing cut-off standards. All athletes will be required to finish the swim in one hour, the bike in five hours and 10 minutes after start, and complete the entire course in eight hours. 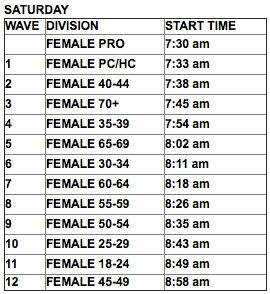 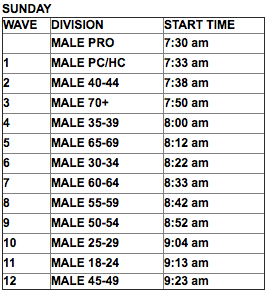