For Marcus Cook, a weight loss challenge led to a lifelong friendship rooted in tri.

When Marcus Cook of Houston, Texas, stepped on the scale and saw the number 489 glaring at him, he sighed heavily. Only four years prior, he had undergone lap-band surgery for weight loss. Initially, it had worked: In the year following the procedure, he had lost 85 pounds. But soon, he gained it all back, plus an extra 39. “It felt like this was the burden I was going to bear for my entire life,” Cook says. “The weight was a lifelong sentence I was just going to have to serve out until they found me dead in my truck. It was a horrible feeling.” 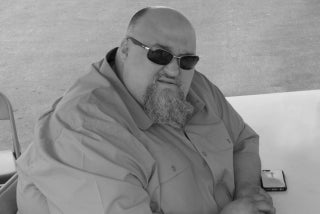 When a close friend was diagnosed with lung cancer, Cook had a talk with him that would change his life. “He said, ‘Marcus, I’m dying because I have an incurable disease. You’re dying because of your choices.’ He made me promise to lose the weight so I could live and be around for my family.” Cook went to bariatric surgeon Garth Davis, who said he’d help on one condition: Cook would overhaul his lifestyle before surgery. As Cook had already seen, weight-loss surgery doesn’t necessarily make you healthy. “When you get to his weight, and have led a sedentary life for so many years, everything seems impossible,” Davis says. “I told Marcus that to be really successful, he needed to understand that the word ‘impossible’ is a dare.”

The first dare: lose 30 pounds with the help of a plant-based diet. “I thought Dr. Davis was crazy,” laughs Cook, “but I ate a bunch of kale anyway.” But a month later, Cook did the impossible–he lost 35 pounds and Davis agreed to do gastric bypass surgery.

The second dare was exercise. “I started walking 20 minutes a day. That led to walking a mile, then two miles. Then running from one light pole to the next. Then running a half-mile,” Cook says. At a post-operative check up, Davis inquired how Cook’s exercise regimen was coming along.

“No kidding?” Davis responded. “I’m an Ironman. We should do a race together.” 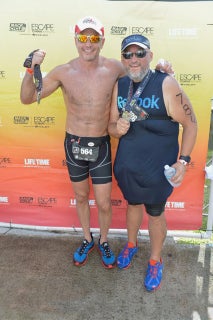 They decided on the 2016 Escape to Miami sprint triathlon as a way to celebrate Cook’s eventually successful 280-pound weight loss and, more importantly, his full-on lifestyle change. On race day, the finish line served as a celebration of their friendship, too.

“It was a brutally hot day in Miami, and I had a difficult race,” Davis recalls. “I kept thinking there is no way that Marcus will finish. But he did, and with a huge smile.”

“He finished way before I did,” Cook says, “and all of a sudden I saw him running towards me. He had circled back after his finish and ran up the finisher’s chute with me.”

“It was incredible,” Davis says. “I am always trying to motivate my patients, but Marcus actually motivates me.”

RELATED: 3 Triathletes On Their Journey From Overweight To Racing Weight