A relative unknown a year ago, 27-year-old Canadian Magali Tisseyre is now one of the biggest threats on the Ironman 70.3 circuit. We sat down with Tisseyre to find out how she went from multisport rookie to bona fide superstar in a matter of months. 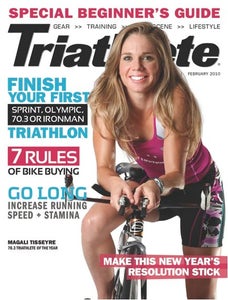 Triathlete Magazine: You dropped 22 minutes from 2008 to 2009 in Clearwater. Where did such a huge drop come from?

Magali Tisseyre: I don’t know if I expected such a big drop, but I hoped for it and I thought it might be possible beforehand. I think having the right coach and doing triathlons almost full time was what I needed for that kind of improvement. I started training with Lance Watson and the Lifesport team. Last year I was training around 12 hours a week throughout the season. This year there were weeks where I was putting in 30 hours a week. That made a huge difference and I don’t think it would have been possible without having the right coach and team around me.

TM: You seem pretty committed to the Ironman 70.3 series. Are you at all curious about some of the other events out there, like XTERRA or even Ironman, or are you happy just focusing on the 70.3 distance for now?

MT: The reason I do half-Ironmans is because I want to be good at Ironman one day. That being said, I’m fine waiting until it’s the right time to do Ironman. I want to make sure I have plenty of speed first. Once I feel I’ve done everything I can with the 70.3 distance then I’ll take on Ironman. I don’t think I’m completely ready yet but I’ve been thinking about trying my first Ironman in 2010.

TM: Which Ironman race would you like to do first?

MT: [Pause] I’d like to talk to my coach about that first. I think maybe a race like Lake Placid, which has a lot of hills and isn’t too hot. I don’t want to go some place crazy hot for my first Ironman because I want to enjoy it a little.

TM: Lance, your coach, seems to be a fan of training camps instead of keeping athletes in one location. What do you like best about the camps versus training in one place?

MT: I love training camp because I love to travel. I think the camps also help keep you from getting bored. It ensures that things are always changing and it keeps you from getting stuck in the same patterns. I think it’s a great way make sure you’re constantly improving.

MT: Maui for sure. The whole team had a lot of fun while we were there. We hiked around waterfalls and rainforests and just hung out as a team. Oh yeah, the training was pretty good too.

TM: Rumor has it that you have some pretty psychedelic tastes in music. What kind of tunes do you rock out to when it’s time to get pumped up?

MT: Well I like all kinds of music, but before I race I always listen to trance music. I don’t know why, it just seems to always do the trick. Paul Van Dyk has to be my favorite. It’s a little weird but it does the trick.

TM: What sports did you participate in growing up?

MT: I was really into boardercross (downhill snowboarding) as a kid in Quebec, but I broke my leg in one of my first races so I don’t do that anymore. I was also into dirt bikes for a little while but that didn’t last too long either.

TM: You just moved from Quebec to Victoria in British Columbia. What prompted the move and have you enjoyed it so far?

MT: I like Vic [Victoria] so far. I love my home of St. Sauveur, but it gets really cold in the winter so it’s nice to be on the ocean and in a warmer climate. They don’t really get any snow in Victoria so I can ride my bike all winter along. Every now and then they get a little snow and everyone panics but they don’t get any real snow—not like at home, at least. I moved because I had finally finished up my master’s thesis at McGill University in Montreal, and Victoria is a much better place to train full time.

TM: What was the topic of your thesis?

TM: Ouch. Why didn’t you try something easier?

MT: McGill’s Kinesiology program seemed focused on running and it was something I already had an interest in, so it just sort of worked out.

TM: Do you think studying kinesiology helped you become a better triathlete?

MT: I learned quite a bit about the contribution of specific muscle groups to running and cycling and how factors such as bicycle frame geometry influence specific muscular activation. This helped me understand the importance of bicycle positioning and how it may influence the quality of the run off the bike. I definitely learned a lot about running injuries while I was doing my thesis and I think that has helped me as a runner, especially when it comes to things like selecting running shoes and identifying early signs of injury. I think learning about this stuff has helped keep me injury free so far.

This article originally appeared in the February, 2010 issue of Triathlete Magazine. Interview by Brad Culp.