In the May/June issue, on newsstands April 20, Inside Triathlon takes readers into the minds of the top triathlon coaches in the sport, who discuss how they would train Lance Armstrong’s return to triathlon. 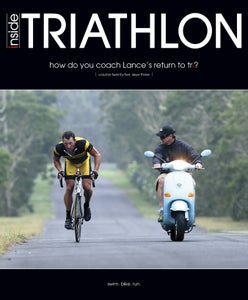 The issue also offers a look into a dangerous medial condition that has halted the careers of world-class triathletes, delves into the minimalist running shoe debate and profiles twin pros Rebeccah and Laurel Wassner.

Inside Triathlon contributing editor Matt Fitzgerald interviews Chris Carmichael, Paul Huddle, Lance Watson, Mark Allen and Gordo Byrn about how they would coach Lance Armstrong’s return to triathlon. The coaches emphasize walk you through how they would train his swim, bike and run for the 2011 Hawaii Ironman.

Brian Metzler, managing editor of Running Times, spent time in Tucson with Rebeccah and Laurel Wassner, two rising pro triathletes who have motivated each other—even through Laurel’s battle with cancer—to being better than either thought they could be.

And Danish star Torbjorn Sindballe, after working with the developer of the Ecco Biom, fills readers in on the latest news in the minimalist running shoe debate.

The gallery, a tribute to the 30th anniversary of the Escape from Alcatraz Triathlon, displays T-shirts, photos, racing bibs and swim caps dating back to the 1980s from one of the world’s most famous triathlons.

Stay tuned for Inside Triathlon’s issue on racing this summer.

What Are Exogenous Ketones?