The epic endurance of Robert Hamilton Owens knows no bounds. A look inside the incredible feats of the world’s fittest swim-bike-runner. Just don’t call him a triathlete.

“Really, I was essentially doing multisport as a Special Ops Pararescueman in the seventies,” said Owens. “I was compelled by reading that Sports Illustrated article in 1979. I knew immediately, after having been in the Special Ops military, that I wanted to test myself and see if I could do this crazy event.”

Spoiler alert: He could. In 1980, 27 year-old Owens completed Ironman Hawaii, a race that kicked off almost 40 years of adventure as he searched for other ways to test himself —racing outrigger canoes, attempting a winter ascent of Alaska’s Mt. McKinley, and completing the SEALFIT Kokoro 50-hour challenge. His most recent accomplishment is the completion of the World Marathon Challenge: 7 marathons, on 7 continents, in 7 consecutive days.

“I first heard about it in May 2017, when someone showed me the video of the 2016 World Marathon Challenge,” says Owens. “Just like with the Sports Illustrated article from 1979, I said to the people around me ‘I am going to do that. I must do that.’”

Of course, simply doing the World Marathon Challenge wasn’t enough. Owens immediately plotted out a series of events in 2017: The first event, called “The 300 of Sparta,” was 238 miles across Greece in eight days in May 2017; The second event, in August 2017, was a 23-mile run-swim-run in southern California, from the San Clemente Pier to the Balboa Pier in Newport Beach, (Owens covered the distance in nine hours); Third, in October 2017, was SEALFIT’s Kokoro, a Navy Seal instructor’s 50-hour challenge. In comparison, the fourth event—November’s Ironman Cozumel, Owens’ 12th Ironman finish—seemed like a cakewalk. He closed out his season with the World Marathon Challenge in January 2018.

At 66 years old, Owens can’t bounce back quite the same way as he did when he first began racing. Next on the docket is a round of surgeries on his shoulder and his leg (“I have to recover from the last seven months,” Owens laughs). Still, the injuries and pain only served to make him stronger:

“[I have] tremendous relief that it is over, but in a crazy way, I had learned how to handle being miserable. I say this in a cocky way, but I just learned how to be in that zone of miserableness. And if they’d paid me a million dollars, I could have done another five or six, because once you understand the zone of pain and miserableness, you’re used to it so it’s not a deal-breaker anymore.”

Post-surgery, don’t expect Owens to sit on the sidelines for long. Something crazy, somewhere, is waiting in the wings, and he knows it. Maybe it’s a triathlon, or maybe it’s something else— 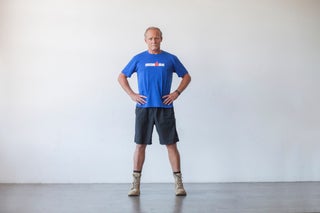 that’s insignificant in his eyes.

“I think one of the highlights of my triathlon career is not training as a triathlete, but training as a well-conditioned general athlete,” says Owens. “What makes it fun for me is that I don’t ride the bike at all before the event. I don’t start swimming until a month before the event. And I run indoors on a treadmill until the last three weeks before the race. Therefore, I am not really a triathlete; rather, I am a guy who knows how to run, bike, and swim, and who’s in condition for the event.”

Through Cancellations and COVID, the Louisville Landsharks Adapt