>Kona during Ironman Season is a lot of things—it’s stressful, it’s hot, it’s intense, it’s a little vain. It can also be super weird. Of all the symbiotic events coinciding with Hawaii Ironman race week, only one this has all of the above packed into less than an hour: The Kona Underpants Run. The whole show was MC’d this year by Roch Frey and Michael Lovato, with a little playfully cheeky banter from the ubiquitous Greg Welch.

There are supertrim bodies, whittled down by focused Ironman training and finely shaved. There are buxom internationals showing what their mama’s gave them. There are also some oddities that raise more questions than they answer. 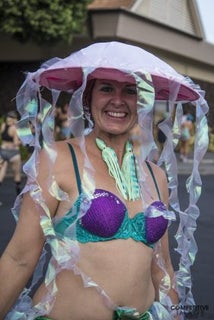 Charlotte Charfen originally from South Carolina is draped in an elaborate jellyfish costume, a squid necklace and a purple/green bikini top.

“I was inspired by Lady Gaga for this one,” says Charfen. “I was going for an under-the-sea-style costume.” It’s Charfin’s first time at the Underpants Run, but it doesn’t show—her setup is one of the most creative at the event. She originally came to help volunteer the race, but like many was sucked in by the pull of the Underpants Run.

Charfin’s hat not only has custom-made tendrils, but is embedded with blinking Christmas lights, and her outfit is completed by a long-flowing ankle-length dress.

Stefan Thoms from Germany is sporting overstretched grannypanties and a suggestively-twisted ladies blouse.

“My inspiration was my grandmother’s underwear,” says the solid-looking man in a thick German accent. He turns and happily shows off a savage-looking splotch suspiciously running from the front of the overstretched panties to the back, via a questionable underneath route. “The food last night was too spicy,” jokes his friend.

Thoms is here supporting another buddy who is racing, but spontaneously decided to don this outfit while in Kona. The bottom half was a two-for-one special at the Walmart nearby for $6 (the whereabouts of the other pair of panties is unknown)—the top part of the ensemble was borrowed from the owner of his rental condo’s mother. 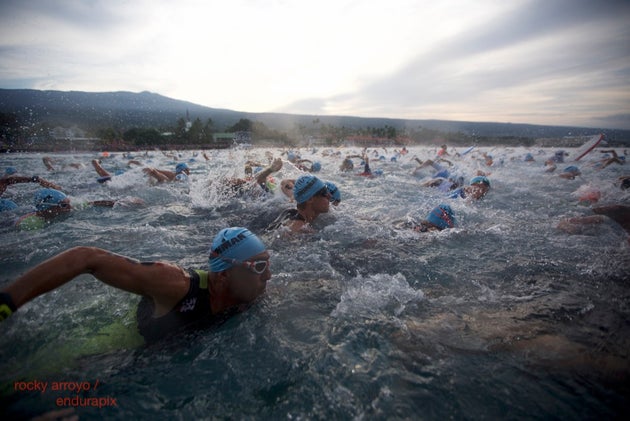 A man known only as Ironfan from Lehigh Valley, Penn., is dressed in an American flag cape, American flag underpants, Wattie Ink armwarmers (?) and a luchador mask.

“I am am a not-so-closeted pro wrestling fan,” says the excitable, very obvious American. Ironfan not only dresses this way for the Underpants Run (his first), but he has suited up the same way for four Ironman finishes in his 15-year career of long-course racing. “Athletes come up to me and thank me,” says Ironfan. “They love the outfit!”

Lest he ever forgets his unique costume, Ironfan has a full-body picture of himself—in the exact outfit— tattooed in color on the right side of his body. The likeness takes up a decent part of his midsection but clearly makes up a huge part of his persona.

Photos: The Kona Underpants Run is Back!

Characters Of Kona: The Energy Lab